US Stimulus Talks Postponed till After the Election

This week, President Trump made his return to the White House and wasted no time to once again appear on the top story for many news outlets as he advised his negotiators to walk away from talks regarding further stimulus until after the election.

This latest development suggests that monetary and fiscal policy may not be fully aligned as news of Trumps decision came just hours after Fed Chair, Jerome Powell warned that the economy could see “tragic” outcomes without robust government support.

Revelations like this may hold more sway on the markets as the US prepares to hold elections next month – learn how this presidential election may prove anything but typical for the US dollar.

Learn how to prepare for market moving news

Event Risk on the Horizon

Scheduled event risk remains relatively quiet this week apart from a number of central bankers speeches throughout the week. Tomorrow, Bank of Japan Governor, Kuroda is scheduled to speak, the US vice presidential debate takes place and the initial jobless claims numbers are released.

Central Banks have the ability to impact major financial markets. Find out why in our FX Trader’s Guide to Central Banks.

The markets seem to have responded more favorably to the return of president trump than to the recent news of the postponement of stimulus talks. The latest surge has propelled the pair above the July/August descending trendline mentioned in our previous report where a break and close above the trendline may present the start of a continued move higher.

However, a near term area of confluence around the 106.20 level (circled in yellow) poses an immediate challenge to a bullish continuation as the 100 exponential moving average (EMA), the red line, currently rests on the 106.20 level. A close above 106.20 and the 100 EMA may see price advance higher to the upper end of the medium term range (shown in blue), before 107.50 and 107.80 become the next levels of resistance.

Should bullish momentum fade and price remain below the descending trendline, this may indicate a reluctance to breakout of the longer term down trend – identified by multiple lower highs observed since June – and may open the door to lower prices. Initial support comes in at 105.35 before the psychological round number of 105.00 becomes the next level of support. Further declines would see 104.80 as the next level of support before retesting the September low. 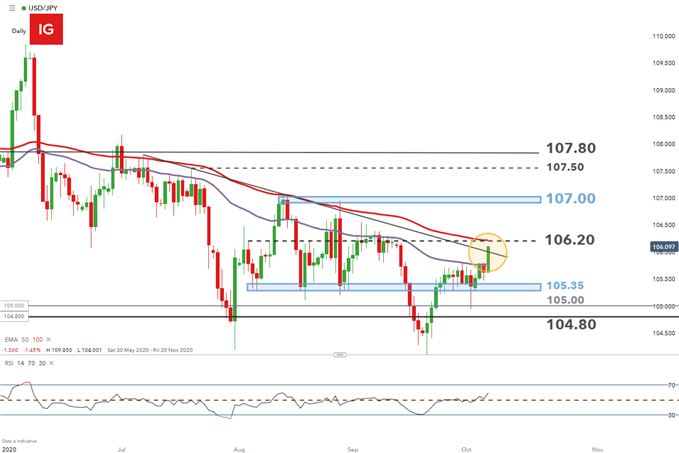 Discover what client sentiment can reveal about FX markets 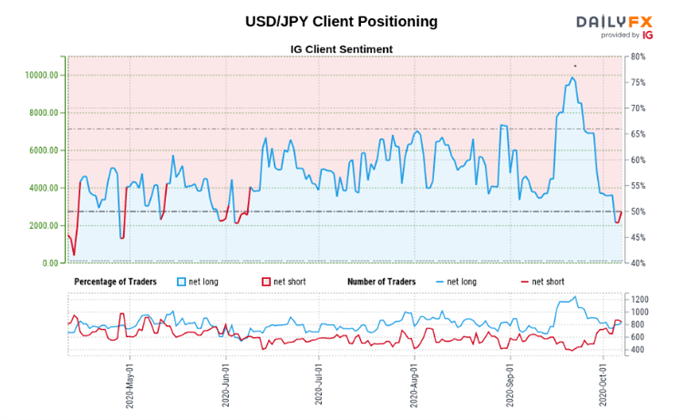 Interpretation of the Data: