Since April, USD/MXN has been on one of its largest retracements in the past decade, with it nearly matching the 2017 decline in terms of percentage lost. Could we be nearing an end to the pullback in the long-term trend, or is there a larger trend reversal in play?

It is too soon to call a long-term top even if April was it, because the decline remains in the context of an uptrend and has been marked so far by a rather choppy decline that smacks of corrective price action versus a reversal.

That could change, though, should we see the current decline begin to really accelerate, and/or even more damaging, take out the February low at 18.53 and the 2017 low at 17.44. Those are a good distance lower, so no immediate threat of those breaking, however; a break would tilt the board in favor of a macro trend reversal.

Another possibility that could lend to a longer-term top (that still needs the prior levels to break) is for USD/MXN to soon find a low and trade higher only to fail and post a lower-high relative to the April peak. This type of price sequence is common at major trend reversals, but, again, some work to do on that front.

In the near-term we could see a recovery within the ongoing trend lower, but rallies may still be difficult for the USD to hold. For now, risk/reward isn’t particularly appealing for either side of the tape…

Check out the Q4 USD Forecast 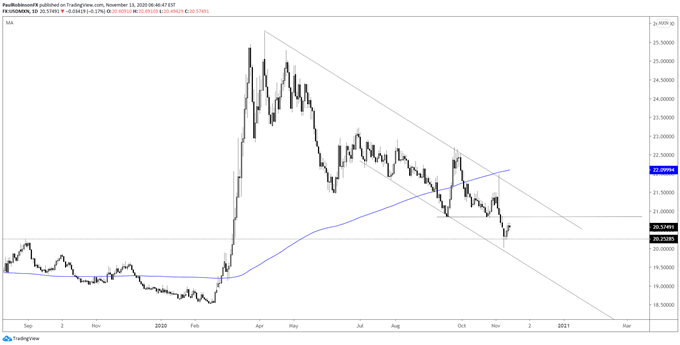