US Dollar Volatility Ranges Ahead of US Non-Farm Payrolls

As is usually the case on the first Friday of a new month, the major focus will be on the US Non-farm Payrolls report. However, while US President Trump stated that a “big” job number is coming on Friday, tightened restrictions through July showed a slight stalling in the Labour market. Alongside this, what had been evident in the ISM PMI’s earlier in the week had been the weaker than expected employment component as well as the ADP report and thus raising the risk of a weaker than expected headline print for today’s jobs report.

NFP and Forex: What is NFP and How to Trade It? 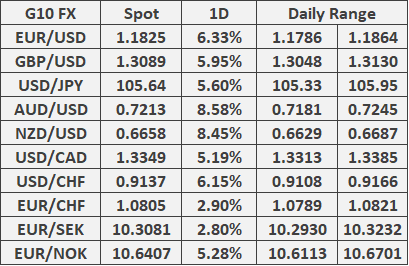 Source: Refinitiv (These ranges are based on a 68.2% statistical probability that they will hold, spot price taken from 09:10BST).

Little interest as of yet for 1.1900 to be taken out, having formed a double top. As such, with EUR/USD stalling at the 1.1900 handle, focus will be on pullbacks finding dip buyers before another retest topside resistance. On the downside, support is situated at 1.1800 and 1.1750. Elsewhere, while markets continue to have a sense of euphoria over the Euro since the EU’s joint fiscal deal, the implosion in the Turkish Lira has cast concerns in the positive Euro story.

Last night, the US said it would place 10% tariffs on Canadian aluminum exports, which in turn saw the Canadian Dollar underperform against its major counterparts. In reaction to this, Canada stated that they would retaliate with a press conference scheduled for 16:00BST. However, with the Canadian jobs report also scheduled today, there are more two-way risks for the Loonie. Upside in USD/CAD curbed by topside resistance at 1.3376 (50% Fibonacci retracement).