The S&P 500 continues to trade in record territory above the early September high. There was a powerful reversal last Monday, but thus far that has meant nothing in terms of reversing the overall bullish trend.

The play right now on this end is to respect the upward trend with the understanding that a pullback could emerge after the extended rise off the October 30 low. But until we see pervasive price action that amounts to aggressive selling it is difficult to stand in the way.

Risk/reward for new longs isn’t particularly favorable without a pullback, but shorting also doesn’t hold much appeal given the lack of sellers around. For now, taking to the sidelines may be the most prudent play.

Check out the Q4 EQUITIESForecast 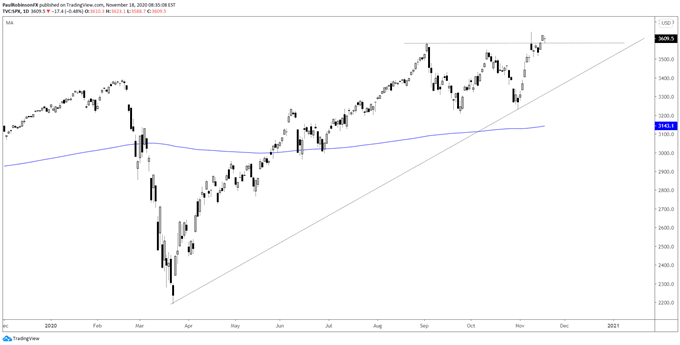 The Dow Jones is hovering in record territory, currently using the pre-coronavirus high as support. A little period of consolidation could do the index some good before trying to trade higher. A small pullback, even if back below the prior high, will be viewed as constructive as long as selling isn’t overly aggressive.

The Nasdaq 100 has fallen behind as the market leader, but that doesn’t mean it is foretelling a bad omen for the broader market. The move sideways is forming a consolidation pattern of sorts, perhaps a nice-looking wedge will form, but even if it doesn’t the market looks set up to continue in the direction of the primary trend. A drop below 10960 would be reason for concern as a lower low develops. A drive through 12439 will of course have the NDX in record territory in search of even higher ground.