DAX 30 wedging past few days, could lead to a move

Last week, we noted that the outlook for the DAX as appearing neutral to bearish. Indeed it has been a mostly neutral past week, with a slightly upward bias. That could change soon if the short-term ascending wedge forming (best seen on the hourly) comes to fruition and triggers to the downside.

If this is the case, then it could lead to the triggering of a head-and-shoulders pattern developing since the third week of July. I am hesitant to get too bulled up on the notion of a head-and-shoulders formation for two reasons – 1. It has yet to form and trigger (obviously) and 2. The DAX has been moving sideways for months with various configurations looking possible, yet nothing coming from it.

But nevertheless, if the short-term wedge leads to the triggering of the neckline of the pattern, interest will be piqued. To really add some conviction to this idea, though, it would also be best to see the July low at 12253 and the 200-day at 12166 broken.

This means that there is still a lot of support for the market below, and if that holds the outlook will at worst be neutral and rangebound with the possibility that we could see a rally later on. If it breaks, then big things could happen on the downside.

All-in-all, this makes for an unclear picture now with potential for a sizable move later. Keep an eye on the US markets as they continue to be the leader in risk markets. They are in a state of limbo at the moment, but that could change quickly with the macro environment being generally fluid.

Check out the Q4 Equities Forecast 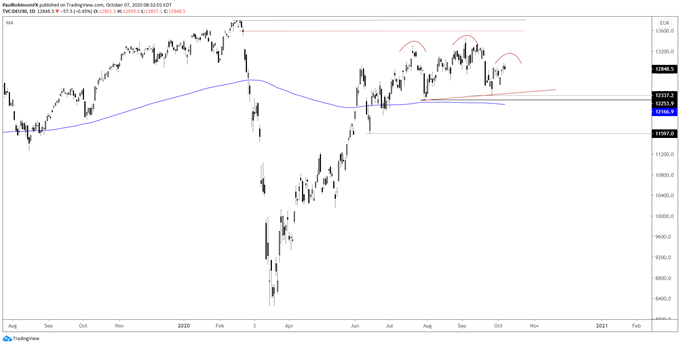 Trying to Bottom at Long-term Support

USD/CAD Highlights:Long-term support from 2009 been helping keep a floor inChannel line from 2017 in confluence with 11-year support...

Cyclical Upturn Ahead for NZD/USD?