The New Zealand Dollar continues underperform relative to its major counterparts as RBNZ doves maintain pressure on the currency. Overnight, the RBNZ Chief economist reiterated the central banks stance that they would like a weaker exchange rate with the expansion in LSAPs to NZD 100bln from NZD 60bln signalling that intention. In turn, with the RBNZ remaining very dovish and with COVID cases re-emerging in NZ, downside risks are likely to persist for the New Zealand Dollar with the 0.6500 handle in focus for the Kiwi. 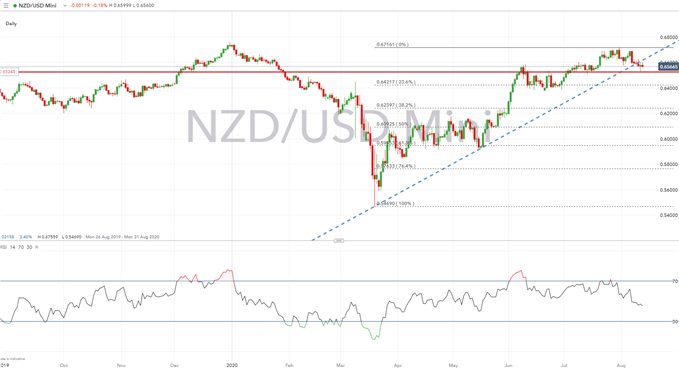 NZD/CAD Remains Tilted to the Downside

Last week, I signalled my interest in NZD/CAD ahead of the RBNZ with bond spreads moving in favour of the Canadian Dollar over the New Zealand Dollar and thus opening the doors to 0.8700. As such, with the RBNZ working in favour of a NZD/CAD pullback, risks are for more downside, following the break below 0.8700, which eyes support at 0.8680 and 0.8630. On the Canadian Dollar equation, oil prices have remained supportive for CAD, having maintained its uptrend with yesterday’s sizeable drop in US oil production keeping oil underpinned.

GOLD PRICE OUTLOOK:Gold prices traded flat after rising 0.76% on Tuesday as bond yields fell alongside the US DollarUS...