Nasdaq 100 May Pull Back, Eyeing 50-Day SMA for Support

The Nasdaq 100 index likely formed a bearish “AB=CD” pattern in September, and has since entered a period of consolidation. The index has retraced almost 5% from the peak of 12,250, hitting a key support level at the 50-Day Simple Moving Average (SMA) before bouncing back (chart below). If the 50-Day SMA fails to hold, the index may decline further to test the next support level at 11,465 – the 76.4% Fibonacci retracement.

The index has just slipped below the 20-Day SMA, which is also the middle line of the Bollinger Band. When price enters into the lower half of the Bollinger Band, this usually signals further downside potential as the medium-term momentum has likely turned bearish. The MACD indicator has also formed a “Death Cross” this week, signaling that downward pressure may be prevailing in the days to come.

On the weekly basis, however, the Nasdaq 100 index appears to be taking a pause after registering a whopping 87% gain from March to August (chart below). The overall trend remains bullish-biased, with the recent consolidation potentially paving the way for higher highs. The 10-Week SMA line may serve as an immediate support, followed by the 20-Week SMA line.

In the medium term, a failure to break above September’s high of 12,260 may result in a “Double Top” pattern on the weekly chart, which could lead to a deeper pullback. 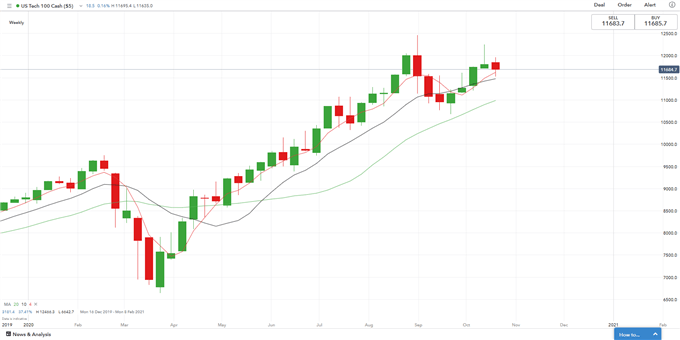 Gold and Silver Rebound at Hand?

Gold Price Forecast Overview:Gold prices have broken down through key technical support, amidst a shift in the fundamental narrative.Deeper...