Recently, the Euro exploded above the September high, putting it in position to rally even further. However, before getting too bullish it was viewed as preferable that we see a consolidation/small pullback that held above the breakout around 12000.

So far that is exactly what we have seen. This sets EUR/USD to rally even higher in the days/weeks ahead. It may not be a straight line move higher, but the general trading bias is towards the upside for the foreseeable future.

Looking to the left on the charts, the next big level of resistance isn’t until the February 2018 high around 12500. It’s not that far away. An obtainable objective between now and the early part of January. At that juncture we could see a big reversal, but we won’t worry about that until price arrives at that point, should it.

To flip the currently bullish bias, an aggressive thrust lower is needed, and one that pushes price below the breakout point of 12011 (September high). This may not entirely reverse the trend, but would put EUR/USD on its backfoot with more losses likely in its future. 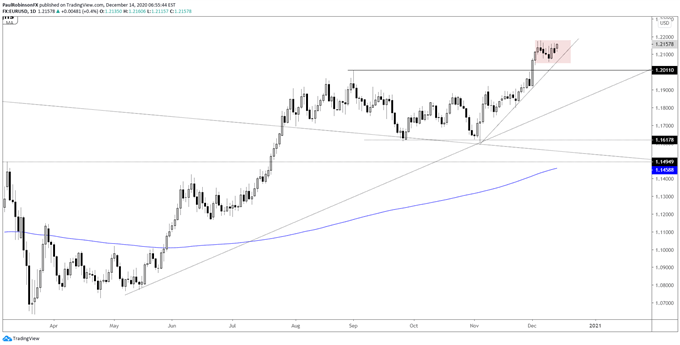 Indices Technical Outlook:S&P 500 trending higher in channel formationDAX price action putting support to the testFTSE could be in...

Gold/Silver Technical HighlightsGold price may continue to sag in the near-termLong-term charts show a healthy correction in bull marketSilver...

Gold Price Technical Forecast: BullishThe formation of a 10-year Cup and Handle pattern suggests that the long-term outlook for...

Euro Forecast Overview:The Italian government is on the verge of failing, while the Dutch government collapsed two months prior...