*** UPDATE *** Since this story was published there has been a notable move higher in Sterling on market talk that the EU and UK may be moving closer to a deal. A tweet from the Whitehall correspondent for the FT , Sebastian Payne, said that ‘officials in London are increasingly optimistic (about) a Brexit deal’ although an insider warned that ‘it’s going to go to the brink’. Neither the EU or the UK has commented on the fresh bout of optimism and so Sterling’s move higher may come back under pressure if one, or both sides, turn the mood negative again.

With just three months left until the end of the Brexit transition period, the EU and UK continue to clash over the terms of a deal as the last round of negotiations commenced this morning at the EU Summit which is being held in Brussels over the next two days. While the European Commission had given the British government until 30 September 2020 to withdraw provisions from its Internal Market bill, failure to meet this deadline has now resulted in European Commission President, Ursula von der Leyen, threatening legal action against the United Kingdom.

Upon release of the news that the two economies cannot agree on state aid, GBP lost traction against its Euro counterpart, temporarily driving price action above the psychological level of 0.91, but bulls failed to maintain control. Meanwhile, the Fibonacci retracement levels taken from the move between February 2020 (low) and March 2020 (high), continue to form support and resistance levels, holding both bulls and bears at bay.

How can news impact your trades? 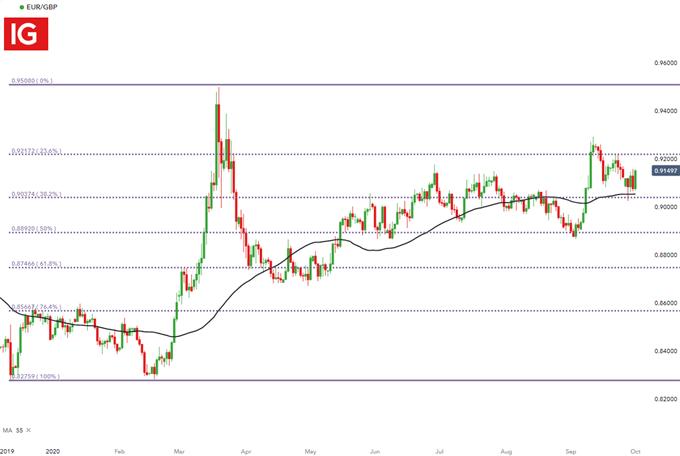 From an intraday perspective, the four-hour chart below highlights a potential breakout channel formation, while the Moving Average Convergence/Divergence (MACD) remains below the zero line, a possible suggestion that the pair may still be oversold.

Trader’s Toolbox: How to Identify Price Trends with Trader Sentiment 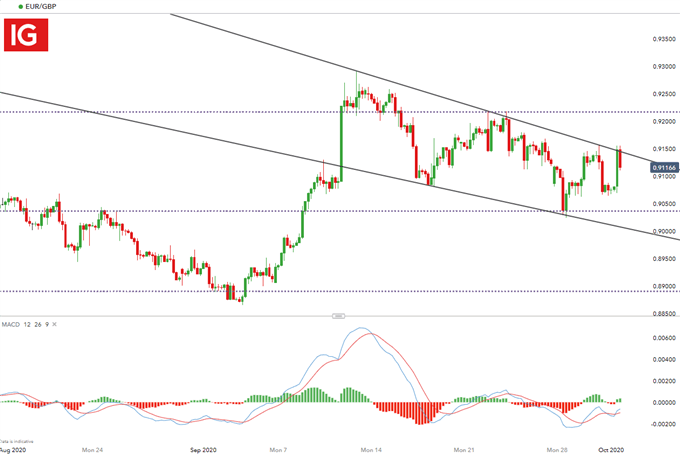 If bulls are able to push above the channel, a bullish breakout may be possible, with the next level of resistance holding at 0.92.

However, if further downward pressure is exerted, the 38.2% retracement level will be the next level of support at 0.90361.

In terms of IGCS, at the time of writing, 54% of retail traders are holding short positions in EUR/GBP but for now, sentiment remains bearish.