The Dow Jones Industrial Average index reached its all-time high of 29,933 on November 9th and entered a consolidative periodsince. The index appeared to have been temporarily overbought after surging more than 14% during the first six trading days in November, rendering it vulnerable to a technical pullback when profit taking activities kick in.

Dow Jones has also hit a key resistance level of 29,570 – the previous high last seen in February. Failing to break this level may lead to a further pullback, with an eye on the 28,000 figure where the 20- and 50-Day Simple Moving Average (SMA) lines overlap. In the event that the index breaks below 28,000, it may open the door for further losses towards the next support level at 26,860 – the 76.4% Fibonacci retracement.

Bollinger Band width has widened recently, reflecting heightened volatility. The price turned lower after hitting the indicator’s upper band, which is usually perceived as a dynamic resistance level. Near-term momentum appears biased towards the downside, as suggested by a flattening MACD indicator. 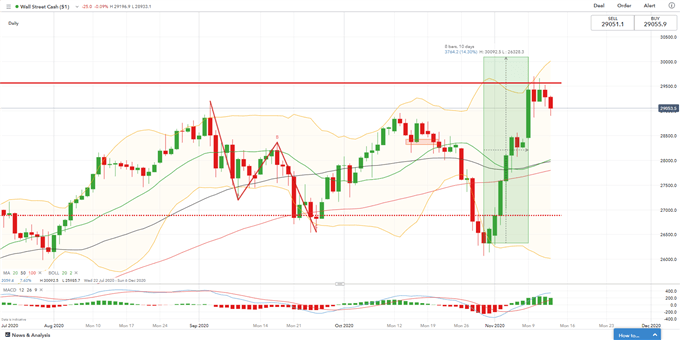 On the weekly basis, however, the Dow Jones appears to be taking a pause after registering a whopping 65% gain from March to November (chart below). The overall trend remains bullish-biased, with the recent consolidation potentially paving the way for higher highs. Both the 10- and 20-Week SMA lines are trending higher, suggesting that the medium-term bull trend remains intact.

Further retracement from the current level may result in a “Double Top” pattern on the weekly chart, which may serve as a medium-term bearish indicator.

Chinese Yuan, Canary in the Coal Mine? Setups in EUR/CNH, USD/CNH

Chinese Yuan Outlook:The turn in CNH-crosses in late-February harkened the tumble in equities.EUR/CNH rates haven’t been climbing, and in...

US Dollar Technical Forecast: Bullish The general consensus coming into this year was for a continued combination of equity...