See the NEW 4Q trading forecast for the Dollar

In volatility terms, the Greenback closed out this past week with seeming reserve. However, the calm was a loaded one given the heightened threat of so many systemic risks surrounding the currency – and ‘risk trends’ at large. The top concern to close out this past week was the news that US President Donald Trump had tested positive for the coronavirus.

Headlines around the pandemic are not at all novel. However, the market had grown somewhat anesthetized to the topic these past months as the social and political implications did not translate into the economic and financial fears as distinctly. That isn’t to say the coronavirus wasn’t taking a serious toll on the forecast for economic activity. It was with reports like the NFPs showing a slowed path of recouping lost jobs from February and headlines that major US corporations like Disney and American Airlines was laying off or furloughing thousands of employees. However, this was apparently not pointed enough to shake confidence.

In the US, the federal government’s resistance to re-shutter the economy to fend off a revival in Covid cases meant the economy could stretch further for some months – though a true resurgence could shutter the economy via consumer and business habits eventually. Yet, with the President contracting the virus, the dynamic changes. This is less likely to change the government’s position on its coronavirus response, but it does raise even greater uncertainty around the November 3rd Presidential election.

The election was already an extraordinarily uncertain event risk ahead that the market is almost certainly ‘pricing’ poorly. Naturally, there is great debate over who wins, when the final numbers are in, the ultimate policies between the two candidates and so on. With Trump contracting the virus, it opens up significantly the spectrum of possible market and constitutional scenarios. 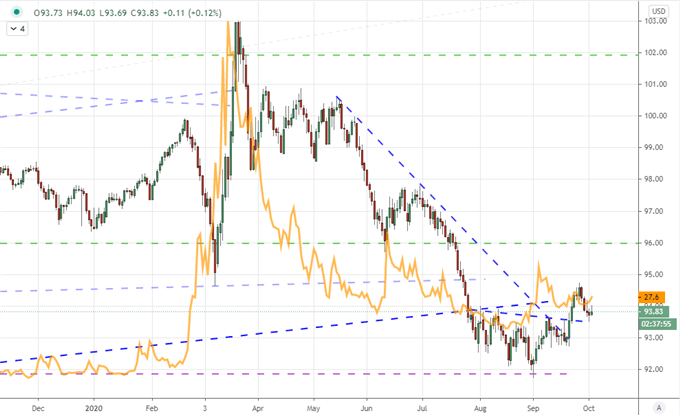 In this situation, it is hard to say whether the Dollar will take on the role of a safe haven currency; or whether it will instead act as the epicenter for uncertainty and thereby an acute ‘risk’ currency. The likely deciding factor is whether uncertainty in the United States stays contained to the country, its economy and financial system; or long-pent up risk taking globally starts to unwind in concert. A broad risk aversion is more likely to restore the Dollar’s ultimate safety perspective – despite itself. Read more on our fundamental and technical USD 4Q forecast in our new trading guides. Read about how another safe haven – gold – has reacted to Presidential elections in this article.

See the NEW 4Q trading forecast for the Dollar

What is it & Why Should Traders Care?