The DAX was walloped on Monday along with other global stock markets, but is working on clawing back those losses and then some. To fill the gap the market will need to rise to 13630, which is only a stone’s throw away from the record high.

A fill and break of 13795 will have the market in record territory. It might again be a bit of a struggle to breakout as it was last week, but given the general mood of stock markets and seasonality, it appears a good proposition to look for new highs sooner rather than later.

Negating a bullish outlook would be a drop below a clear area of support from 13060 down to 13004. The area just above 13k has been quite supportive and is viewed as the line-in-the-sand between neutral/bullish and bearish on the shorter-term time horizon.

Find Out the #1 Mistake Traders Make

The CAC 40 has nearly filled its gap up to 5527.8. From there price needs to cross 5616 to trade to its best levels since the coronavirus meltdown. The CAC has generally been a laggard given how far away it is from the pre-virus levels, but will remain firm as long as the DAX continues to hang tough or better. There might be a relative difference in performance that later presents the CAC as a better short, but for now it generally feels like an uphill battle. 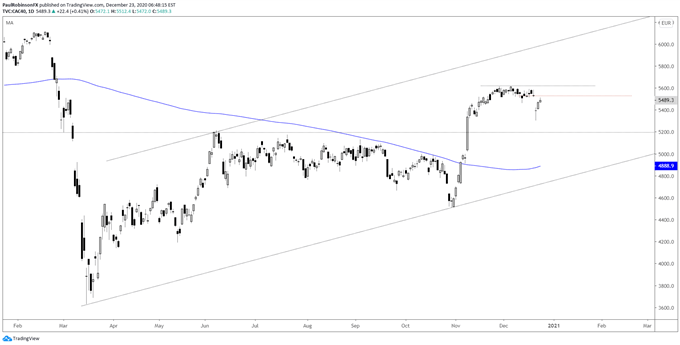