Rising risk appetite is boosting higher yielding and riskier assets around the world, with news of the AstraZeneca/Oxford vaccine approval in the UK providing another jolt of optimism to the few traders still operating in the Christmas-New Year’s interlude. Currencies like the Japanese Yen, Swiss Franc, and US Dollar have been pulled lower as traders seek more exposure to growth-linked currencies like the Australian, Canadian, and New Zealand Dollars.

The second of the trio, the Canadian Dollar, has been lagging its antipodean commodity currency counterparts, in part due to geographic proximity to the coronavirus pandemic: Southeast Asia is faring much better than North America or Europe. But that doesn’t mean that the Canadian Dollar isn’t on strong footing: economic data momentum, per the Citi Economic Surprise Index, remains at a four-week high. What is shaping up to be a favorable ‘Santa Claus Rally’ period for risk assets may be a good omen for the Loonie, which appears on the precipice of more gains vis-à-vis CAD/JPY and USD/CAD rates. 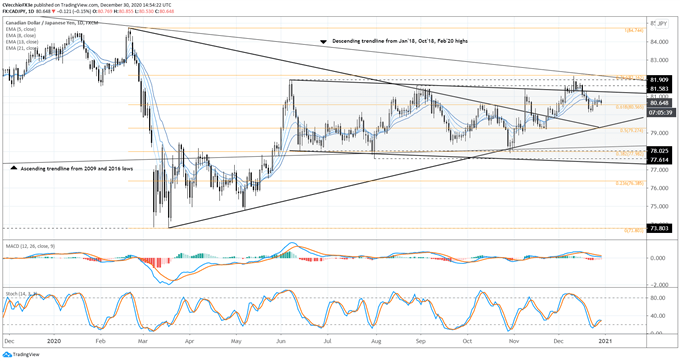 Patience is required, thus no change in the outlook from Tuesday: “given the holiday price action, it’s too soon to say that the CAD/JPY bullish breakout attempt has been denied. It remains true that clearing 81.58 and 81.91 [on a closing basis] would be strong indications that CAD/JPY rates were embarking on an earnest bullish breakout attempt… CAD/JPY rates are starting to regain bullish momentum. CAD/JPY rates are above their daily 5-, 8-, 13-, and 21-EMA envelope, which is in neither bearish nor bullish sequential order. Daily MACD is starting to turn higher while in bullish territory, and daily Slow Stochastics have risen out of oversold territory. While the CAD/JPY chart suggests more patience is required, traders should be on alert for another attempt at parallel channel resistance in the 81.58 to 81.91 zone in the next week or two.” 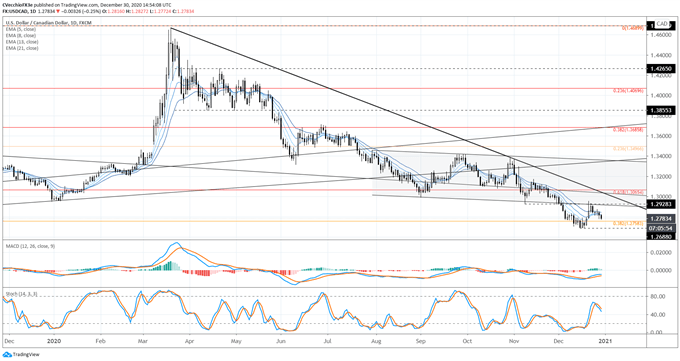 In the last update it was noted that “USD/CAD rates have stopped in their advance, capped by the early-November swing low at 1.2928, which is also former support from the descending channel between late-July and early-December…a lack of enthusiasm on the way higher still suggests that the break of the uptrend from the 2012 and 2018 swing lows offers more evidence of a long-term double top coming into play.” The turn lower from the November swing low continues as anticipated (“USD/CAD rates may be on the verge of another swing to the downside”), with USD/CAD rates trading at their lowest level since December 18.

With USD/CAD rates extending their drop below their daily 5, 8-, 13-, and 21-EMA envelope, which is in bearishsequential order, a fall back to the yearly low at 1.2688 appears on track. Daily MACD is narrowing and turning lower while below its signal line, and daily Slow Stochastics are falling into their median line. 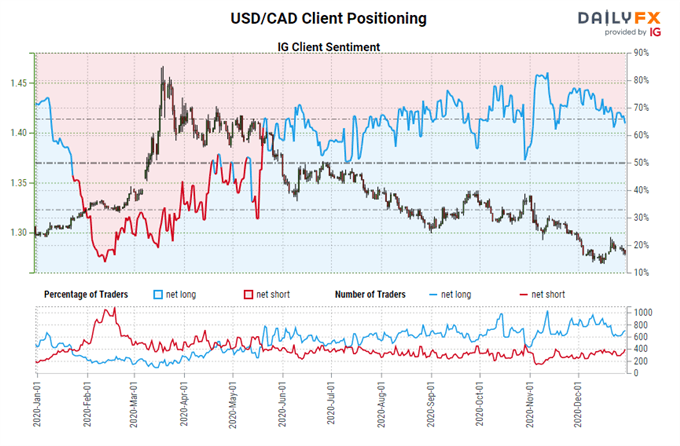 Positioning is less net-long than yesterday but more net-long from last week. The combination of current sentiment and recent changes gives us a further mixed USD/CAD trading bias.

Copper Technical OutlookCopper forming a solid wedge pattern within context of uptrend2011 highs targeted on a push higher out...