USD/CAD ramped off a long-term zone of support to start last month, which could soon again come back into play. The question is whether the current near-term support can hold before a more thorough, and possible breaking, of longer-term support takes shape.

The area around 13320 began back in early August when a small bounce developed. At first it was not viewed as a meaningful event, but since then the low has acted as resistance on a few occasions through the month of August into September. The level is most easily visible on the 4-hr time-frame.

If this support area can hold then we could be witnessing the end of the decline and another leg higher starting to develop, with the recent high around 13420 up as the first meaningful level of resistance. If, however, we see support fail here, there is another level of near-term support around 13125 before a much more meaningful test of long-term support comes into play.

The long-term level put a floor in in September and consists of a horizontal level running over that began as a major high during a spike in 2008/2009 and has been in and out of play in recent years. The zone roughly surrounds 13000. It is also in confluence with a lower parallel dating back to 2017.

A failure to hold the 13000 support region could set off a much larger move lower, but before we can worry about that the near-term levels are in focus first. 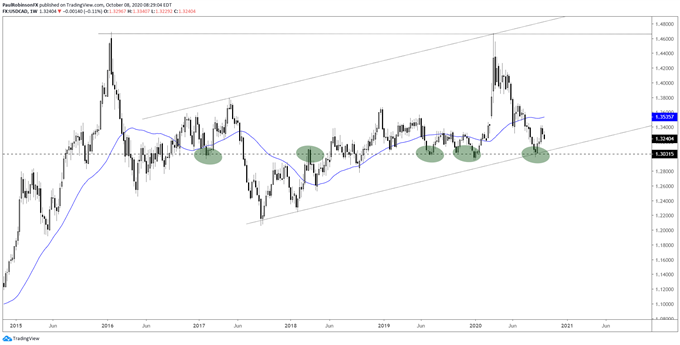 GBP/USD Technical Outlook: BullishUpward sloping channel keeps outlook neutral to bullishIt will require a breakdown out of the channel...

USD at Risk of Breaking Support vs Peso

USD/MXN Highlights:USD/MXN weakness continues with USD selling, risk appetite steadyCrossroad of support just below, but not confident it will...

Canadian Dollar Forecast Overview:With the equity market rally stalling, risk appetite has waned as the prospect of another round...