AUD/USD pulls back from a fresh monthly high (0.7374) as the US Dollar recovers on the back of waning risk appetite, but key market trends may keep the exchange rate afloat ahead of the Reserve Bank of Australia’s (RBA) last meeting for 2020 as the Greenback continues to reflect an inverse relationship with investor confidence.

AUD/USD breaks out of the range bound price action carried over from the previous week as the US Dollar Index (DXY) seems poised to challenge the yearly low set on September 1 (91.75), and the correction from the yearly high (0.7414) appears to have been an exhaustion in the bullish trend rather than a change in behavior even though the RBA “is prepared to do more if necessary.”

Looking ahead, the RBA may move to the sidelines after laying out plans to purchase “$100 billion of government bonds of maturities of around 5 to 10 years over the next six months” as Australia unexpectedly adds 178.8K jobs in October, and it seems as though the central bank will keep the official cash rate (OCR) at the record low of 0.25% on December 1 as “the economic recovery is under way and positive GDP growth is now expected in the September quarter.”

In turn, Governor Philip Lowe and Co. may carry out a wait-and-see approach over the coming months as “the recovery is still expected to be bumpy and drawn out,” and key market trends may continue to influence AUD/USD in 2021 as the Federal Reserve’s balance sheet climbs to a fresh record high in November. 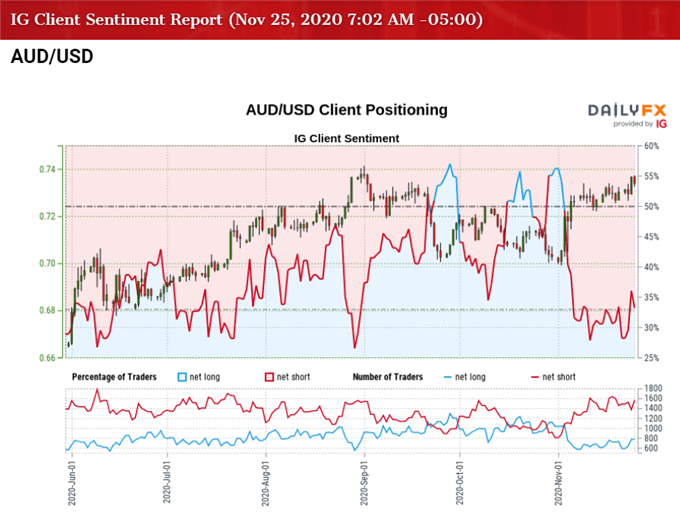 At the same time, the tilt in retail sentiment looks poised to persist as the crowding behavior from earlier this year reappears, with the IG Client Sentiment report showing 33.82% of traders are net-long AUD/USD as the ratio of traders short to long at stands 1.96 to 1.

The number of traders net-long is 10.70% higher than yesterday and 5.36% higher from last week, while the number of traders net-short is 1.52% higher than yesterday and 6.50% lower from last week. The rise in net-long position comes as AUD/USD breaks out of the range bound price action carried over from the previous week, while the decline in net-short interest has helped to alleviate the tilt in retail sentiment as only 32.89% of traders were net-long the pair the week prior.

With that said, the correction from the yearly high (0.7414) appears to have been an exhaustion in the bullish trend rather than a change in behavior as AUD/USD trades to a fresh monthly high (0.7374) ahead of the Thanksgiving holiday, and swings in risk appetite may continue to sway the exchange rate in December as the US Dollar largely exhibits an inverse relationship with investor confidence.